Mega Ball is a fast-paced presenter-led live casino game show title that offers players a unique hybrid of a lottery and bingo. Thanks to some huge multipliers this action-packed game can see players win up to 1,000,000x their stake!

What is Mega Ball?

Mega Ball isn't like anything we've seen before! This fast-paced live casino game show title combines a lottery, bingo, multipliers and a heart-stopping bonus round that can ultimately see players win 1,000,000x their total stake (yes, you read that correctly one million times).

The game is played in several phases, first players need to purchase game cards that feature 24 randomly arranged numbers on a 5x5 grid. In order to take part in a draw, a single card must be purchased, players can buy cards in bundles of 10, 25 or 100.

Once you have obtained all of your cards you'll have to wait for the draw to begin, when it does 20 numbered balls are sucked up through a see-through lottery machine and are dropped into a tube where they rest.

Whenever one of the balls matches the numbers on your cards they will be marked off automatically, you won't need to do anything yourself! The cards will also order themselves so that the ones closest to winning sit in the centre of the game screen.

When a complete line of numbers is marked off your winnings are updated and displayed on the corresponding card at the bottom of the screen. You can also see how many and which numbers you need in order to win a certain amount of money highlighted in gold. 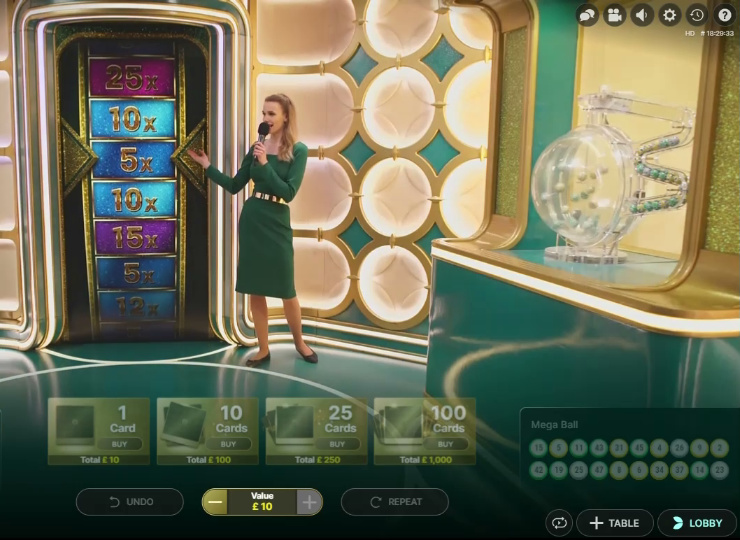 After all 20 balls are drawn from the machine the Mega Ball Bonus Round begins. A wheel is spun that randomly chooses a multiplier between 5x and 100x, then a 21st ball is pulled out from the machine.

If this 21st ball (known as the Mega Ball) completes any line in your cards then the payout on that card is multiplied by the Mega Ball multiplier that was just previously decided upon.

Occasionally an alarm will randomly sound and second Mega Ball will come into play (the 22nd ball overall), giving you a second chance to win big, if you're lucky enough to have both Mega Ball numbers your payout will be multiplied by the highest value Mega Ball.

If the Mega Ball does not complete a winning line then it will be treated as a regular ball and will not multiply the payout at the end of the game.

Players win based on the number of lines they've managed to strike off on their game cards. In order to make any profit whatsoever, players must strike at least 2 lines from their cards.

If you're looking to get the most from this game we'd recommend playing with the maximum number of game cards as this puts you in the best position to strike off 6 or more lines.