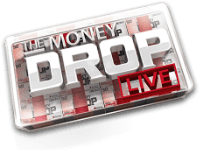 Fortune favours the brave in this epic Playtech live casino game show, based on the famous television show The 100k Drop hosted by Davina McCall.

Players can win up to a cool 5,000x their stake by betting on the outcome of a 54-segment wheel of fortune, before then risking their newly gained riches on one of four trapdoors! If the money falls it's gone, if it stays it's yours to keep!

What is The Money Drop Live?

The aim of the game is to win a large chunk of starting money by placing up to 8 bets on a 54-segment money wheel, players must then use the money they win from this on the Money Drop rounds.

During the Money Drop round players must spread their winnings from the money wheel segment of the game between one and four trapdoors (labelled A to D), correctly guessing which of the trapdoors will not open, so that they can walk away with as much cash as possible.

There are 8 different bets in total that players can place in the money wheel segment of the game. 7 of the bet choices are on standard multiplier segments that will see players take their winnings into the Money Drop round, the other option is the Card Clash bonus game that can see them win up to 1000x their stake.

The higher the value of the multiplier segments, the more Money Drop rounds players must get through in order to take away any final winnings, the breakdown of segments and rounds are as follows: 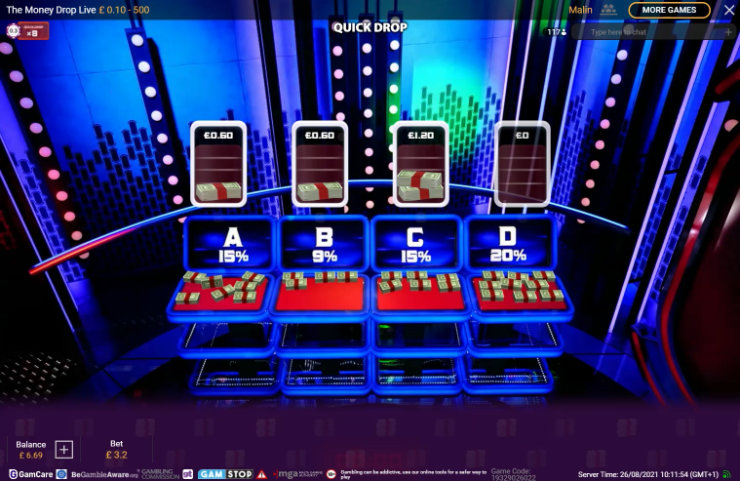 Once you have won a cash prize from the money wheel you're taken to the Money Drop rounds. At this point in the game, the money you have won is not yours to keep.

All of the money is split into 10 stacks that are each of even value, you must then distribute this money across the four trapdoors (A to D) as you see fit.

The aim of the game is to retain as much money as possible. After a timer has ended and you've spread your cash three of the four trapdoors will open and the money placed on them will disappear forever.

If you're playing on an 8x, 15x, or 30x game round, you'll only need to risk your cash once before your winnings are paid out. If you're playing the higher-value game rounds you will need to continue risking the remaining cash until all of the rounds have been completed, or until you have lost all of your initial winnings.

Players choose how much to risk on each trapdoor by dragging a slider above the trapdoor with their mouse or finger, depending on the device they're using to play.

Autostack - Take the stress away!

If you're unsure of how you want to risk your money, and you don't feel entirely comfortable making the decision for yourself, you can press the autostack button which allows you to choose how many trapdoors you want to cover, the game will then automatically divide the money in the most sensible way across each of them.

If the money wheel lands on the card clash segment of the wheel and players have wagered on it then they'll be taken to a new mini-game that's played with a shuffled deck of 52 playing cards that are manually shuffled by the host before the game begins.

Players must select a side to support, left or right. A card is dealt to each side, one at a time, the side with the higher value card out of the two wins. At the end of all 3 game rounds, players will receive a payout based on how many wins or draws they achieved. Players who lose on all three rounds will not receive a payout.

Ties grant multipliers to both sides, and if the Card Clash round sees 3 ties in a row then everyone playing will receive the maximum win, a 1,000x multiplier.

There are really only two strategies players can adopt when playing The Money Drop Live, these are playing dangerously for big payouts and playing conservatively for smaller, but more reliable payouts.

If you want to win big playing Money Drop Live then you'll need to risk your entire balance on the Money Drop bonus game rather than spreading it across multiple trapdoors. This is much easier to do in the 8x, 15x and 30x games, as you only need to play the bonus once. However, when playing in the big money rounds the odds of you correctly guessing the right trapdoor two or three times is much slimmer.

If you're a high-rolling player this is undoubtedly the best strategy to pick up some pretty big wins if you've got the nerve to play this way.

It's important to pay attention to your bet levels to ensure you're winning back more than you originally staked. This strategy won't see you win huge chunks of money, but you should be able to steadily boost your bankroll over time.