What is Monopoly Live?

The game is a variation of Evolution Gaming's Dream Catcher Live with official Hasbro/Monopoly branding. Want to play? The concept is very simple: A charismatic game show host will periodically spin a giant wheel that is split into 54 equal segments and separated by pins.

48 of the segments on this wheel are numbered 1, 2, 5 and 10, if you were to place a bet on any one of these numbers and the wheel landed on the same one then you’d win the corresponding amount of back.

For example, had you had bet on on 5 and it comes in you’ll win 5x your bet.

Of course the higher the number, the fewer the times they appear on the wheel, here’s a full breakdown of how many times each number features:

What about the other 6 segments we hear you ask? They’re the segments you really want to see the wheel land on! These segments are rolls (2 rolls and 4 rolls) and chance. Here’s how many times they appear:

If you’re lucky enough to have the wheel land on either of the two chance segments then Mr. Monopoly will present you with a chance card which could be one of two things…  Either a random cash prize that goes to every single player that placed a stake during that round, or a random multiplier bonus.

If it is the multiplier bonus then a multiplier is added to the winnings on the next spin, you will not have to place a new bet which is a nice bonus! On the off-chance that the wheel stops on another multiplier than the multiplier is multiplied (It’s rare but we’ve seen it happen).

If the multiplier is immediately followed by 2 roll or a 4 roll then every single one of the properties on the Monopoly board during the bonus round are multiplied which can lead to incredibly high winnings for all of those playing the board.

To the left of the wheel is an incredible 3D augmented reality Mr. Monopoly, he sits in his chair reading his newspaper or drinking tea until called upon for bonus rounds when he takes over from the real life host.

To the right of the wheel is a large golden plinth that plays home to the dice which are rolled during bonus rounds.

If you've played Dream Catcher Live then you'll understand the Monopoly Live interface straight away as they're incredibly similar!

The bottom of the game interface is where players will find all of their betting options (Pictured below). On the far left you will find your balance and bet amount underneath the Monopoly Live logo.

In the middle you will see 6 Monopoly bank notes with 1, 2, 5, 10, 2 rolls and 4 rolls written on them, these notes correspond with the matching number on the game wheel. Players place their betting chips on the note that they think the game wheel will land on, players are not restricted to just betting on one note, the can bet on as many as they please.

On the far right you'll find the wheel history, which shows players the last 24 numbers the wheel has landed on in consecutive order.

The Monopoly Live bonus round

If the wheel lands on a 2 roll or 4 roll segment then the bonus round kicks in. This is where the fun really begins, you’ll see Mr. Monopoly himself hop out of his armchair and transport himself the players into an immersive 3D Monopoly world.

If you're lucky enough to hit ANY doubles when during dice rolls then players will receive an additional roll on the bonus round board, there's no limit as to how many additional rolls you can get.

If the dice rolls are high enough that Mr. Monopoly makes one full journey around the board, passing GO then all of the multipliers on the board will be doubled. 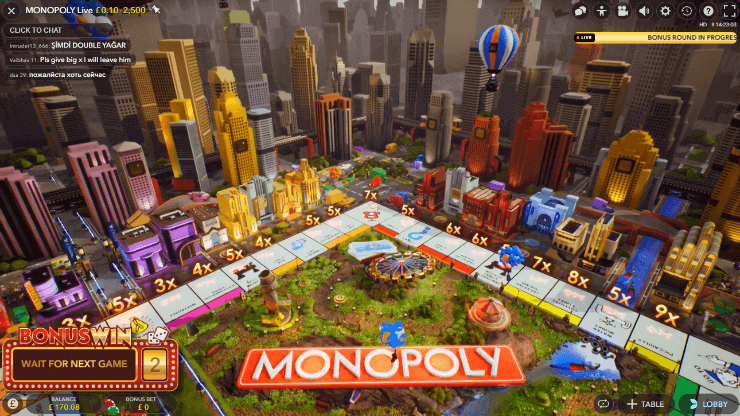 Sadly, the bonus game isn't all positive though, there are a small handful of potential pitfalls. Players should be well aware of some sneaky squares dotted around the board that could see you suffer!

If a Mr. Monopoly lands on the Go to Jail square then a double must rolled on the dice to continue playing, if this isn’t achieved then everyone will take whatever bonus winnings they’ve already accumulated. However it most likely won’t be much!

If a Mr. Monopoly lands on Income Tax then unfortunately the player will have 10% of their winnings reduced.

If Mr. Monopoly lands on Super Tax then unfortunately the player will have 20% of their winnings reduced.

The opportunity to win big money playing Monopoly Live is certainly there, that's why this game is so popular with players all across the world, with thousands logging in and playing every hour of the day.

No matter how you choose to play Monopoly Live, we at Lucky Game Shows always recommend placing a bet on the 2 roll and 4 roll segments, the bonus round can be highly lucrative.

If you need any more convincing, just check out the statistics from our article researching where the monopoly live wheel lands the most, it'll give you a very good indication of just how much can be won and when! 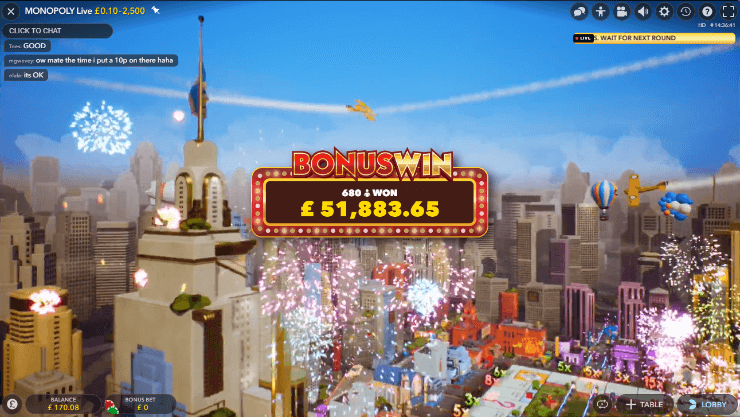