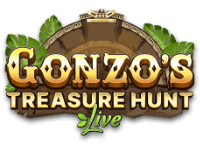 Spanish conquistador Gonzalo Pizarro (Gonzo to you and I) has finally made the leap from the world of online slots to live casino game shows! This epic pick and click game tasks players with entering the lost city of El Dorado where they must correctly guess the location of high-value treasure stones.

Gonzo's Quest Treasure Hunt Live is a live casino game show title developed by Evolution (in collaboration with NetEnt) that sees you transported to the lost city of El Dorado where Conquistador Gonzalo Pizarro (affectionately known as Gonzo) and a live game host await you ahead of some high-octane gameplay.

The objective of this game is quite simple! You must correctly guess whereabouts the location of high-value treasure stones will appear on a 7x10 wall of stones (70 stones in total).

How do you play Gonzo's Quest Treasure Hunt Live?

You must guess the location of high-value treasure stones on a 7x10 game wall, once the timed betting round comes to an end the game will play out automatically and all of the stones are shuffled. Before stones are revealed bonus multipliers may or may not be added to the game to see players win more lucrative prizes.

Once the prize drop section of the game has taken place each set of stones are revealed one by one. If a high-value stone appears on one of the locations you selected then you will win multiplied cash prizes. 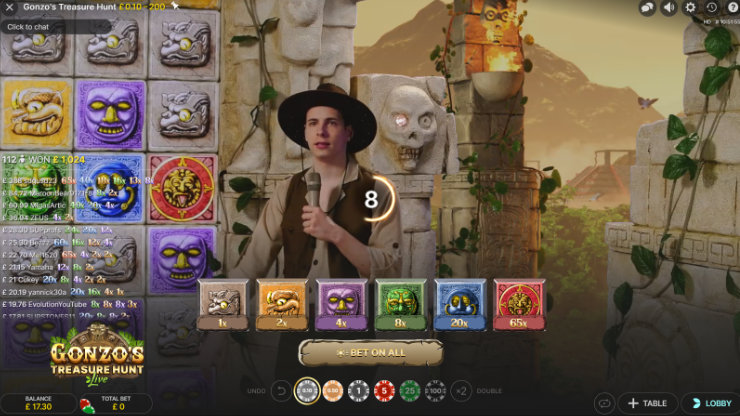 Betting is broken down into two sections. Firstly, there are six different treasure stones you can bet on, these are brown, orange, purple, green, blue and red stones. Each stone has its own value (shown in the table below) and you can bet between £0.10 and £100 on each of the stones, or all of them if you so wish.

The second bet selection is the number of searches you want to make, this can range from just one search to a maximum of 20 searches. The more searches you purchase, the higher the chance you have of finding a treasure stone... However, this comes at an increased stake.

Your total bet will be the total value of all your placed bets on the treasure stones multiplied by the number of searches you've picked. So if you were to place £5 on orange and £5 on purple and then placed 10 searches around the wall then your stake would be £100 (£5 + £5 x 10 = £100).

How much is each stone worth?

Once you've completed your bet selection Gonzo will walk up to a large lock, pull out a giant key and start the game. At the very top of the wall between 0 and 7 bonus multipliers (valued between 3x and 100x) will zip along the screen. If there's a gap below one of these bonus multipliers then it will fall through and land somewhere on the game wall, increasing the prize value of whatever stone it lands on.

A re-drop can potentially occur at any time during any game round, this repeats the prize drop so that multiple (up to a total of 10) bonus multipliers land on the game wall massively increasing the win potential of the game. The maximum amount any individual stone can be multiplied by is 20,000x.

If you weren't satisfied with playing Gonzo's Treasure Hunt game on your mobile device or desktop computer then there's the opportunity to play this game in virtual reality... Yep! You read that right! Gonzo's Treasure Hunt is the world's first Live Casino game to offer gameplay in VR, this allows players to feel like they're actually stood in the lost city of El Dorado with Gonzo and the live game host.

In order to play Gonzo's Treasure Hunt in virtual reality mode players will need their own VR headset and a controller to interact with the game. The game plays in exactly the same way that it would on desktop or mobile, however, players will be able to look around and feel significantly more immersed in the gameplay.

Is Gonzo's Treasure Hunt worth playing?

We won't beat around the bush, this game is incredibly simple when it actually comes to core gameplay, it's essentially a beefed-up pick and click mini-game that you might find in any online slot game bonus round, and is essentially the same as the Cash Hunt bonus found in Crazy Time.

That all being said, we're not complaining! Gonzo's Treasure Hunt looks fantastic, is fun to play and genuinely kept us entertained for a fair while. We'd most certainly recommend giving it a go if you've not already tried it.

Ultimately, we'd say that Evolution's acquisition of NetEnt seems like a real masterstroke looking at Gonzo's Treasure Hunt. The quirky Spaniard fits seamlessly into this quirky live casino game show title and we foresee a very big future for Gonzo in this space. We're excited to see what comes next.